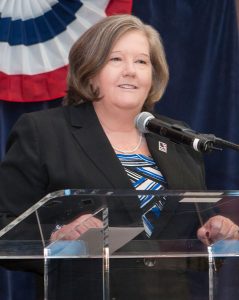 Megan J. Brennan was the 1st woman Postmaster General and Chief Executive Officer (CEO) of the United States Postal Service (USPS), the world’s largest and most technologically advanced post. She served as the 74th Postmaster General and of the United States from February 2, 2015 – June 12, 2020. Megan previously served as the 1st woman Chief Operating Officer (COO) and Executive Vice President and held prior roles as the Vice President of both Eastern and Northeast area operations.

Megan has deep expertise in logistics after a 34 year career in operations and leadership positions of increased responsibility, including more than 5 years as the CEO of a $73 billion business that provides a vital delivery platform, serves every American business and household and employs more than 630,000 people.

The USPS is a self-funded business, structured like a private corporation, which competes for customers and generates its revenue from the sale of postage. If a private sector company, the Postal Service would rank 46th in the 2020 Fortune 500.

As Postmaster General, Brennan advanced transformative strategies and shaped growth opportunities for the organization and industries it serves by increasing capital investments, leveraging the extensive and integrated postal network and infrastructure and enhancing service and product offerings. During her tenure, top line revenue grew annually. Shipping and Package Service revenues increased exponentially while USPS delivered more e-Commerce packages to homes than any other delivery company. USPS was named the most favorable government agency in 2019 while favorability ratings increased annually during her tenure.

Brennan earned a Masters of Business Administration degree as a Sloan Fellow from the Massachusetts Institute of Technology. She is also an alumna of Immaculata College.